The third and final scientific cruise of the 2018 summer season sails today to the Barents Sea in the Arctic Ocean. As part of the £16 million, UK flagship research programme the Changing Arctic Ocean, funded by the Natural Environment Research Council (NERC), it supports UK scientists carrying out vital research on how climate change is affecting the ecosystem of the Arctic Ocean. Scientists from several UK and European research institutes will be working on-board the RRS James Clark Ross as the ship travels the length and breadth of the Barents Sea. 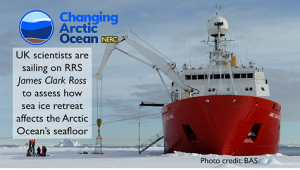 Warming in the Arctic region is increasing faster than elsewhere on the planet. This is having an unprecedented impact on how the Arctic ecosystem operates. One of the key drivers of change is the retreat of sea ice in the Arctic Ocean, upon which the ecosystem is heavily reliant for the delivery of light and nutrients to drive biological productivity. The impacts of retreating sea ice affect the whole Arctic Ocean, including the sea floor that depends on the downward drift of food from the surface to sustain animals living at the bottom. This year has seen record lows of sea ice, with far less ice sea ice in the Barents Sea this month compared to the same time last year. The team heading to the Arctic today will investigate how the rapid retreat of sea ice affects the processes happening on the sea floor. 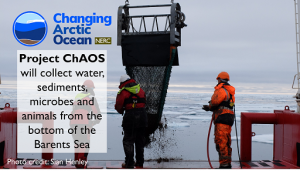 Scientists from the programme’s ChAOS project will spend a month at sea to collect water, sediments, microbes and animals from the bottom of the Barents Sea. They have two critical areas of interest. The first is the Polar Front, where the Atlantic enters the Arctic Ocean and brings in water with different nutrient concentrations, salinity and temperature. The second is the edge of the sea ice, where marine ecosystems go from complete darkness during full winter sea ice cover to experiencing light again as the sea ice recedes during the transition to summer. The presence of light and nutrients is essential for the microbes and animals at the bottom of the Barents Sea to grow. 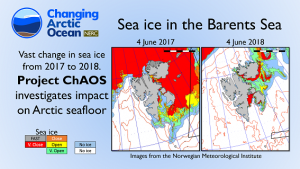 The team will revisit similar locations to their first trip to the Barents Sea in July 2017. This might sound boring, but it is vital to compare results from one year to the next to see how quickly the Arctic seafloor responds to changes in sea ice conditions. The scientists leading this research will send various contraptions to the seafloor to collect different kinds of samples, from huge bottles attached to frames for seawater, steel boxes for collecting sediment, to plastic tubes that will core the top metre of sediment. 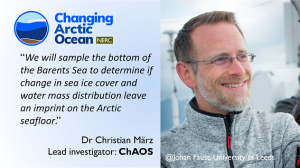 Some new experiments will be introduced this year to expand the investigation into the impact of climate change in the Arctic. Scientists on the team from the Université Libre de Bruxelles will test for methane emissions from the sea surface to the atmosphere by collecting samples of water and atmosphere. Some of the seafloor animals they collect are also going to be carefully nurtured in big aquaria on the ship for more experiments back on dry land. 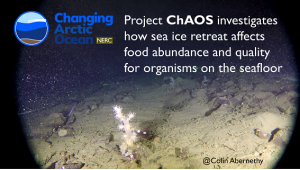 Dr Christian März, from the University of Leeds and lead investigator of the ChAOS project: “Our 2018 ChAOS cruise will be very exciting – which might be hard to believe if you tell people that we will return to the same locations in the Barents Sea we sampled in summer 2017. But going back to these places is exactly what makes our research relevant. It is the only way to determine if the changes in sea ice cover and water mass distribution we see from one year to the next leave an imprint at the Arctic seafloor as well. In addition, in 2018 we will have new collaborators from Norway and Belgium on board, and we will significantly expand our seafloor research program. With our experience from 2017, we will, for example, be able to sample animals from the seafloor much more systematically and preserve them in large aquaria for further research back at home.” 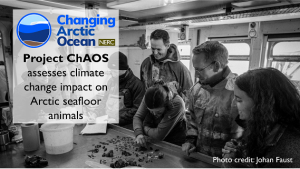 Prof Steve Widdicombe, from Plymouth Marine Laboratory, is the Principal Scientific Officer and responsible for leading the 2018 ChAOS expedition*: “The Arctic Ocean is one of the most rapidly changing environments on our planet and, as marine scientists, it is certainly one of the most exciting and important environments for us to study. On last year’s expedition we encountered a lot of sea ice in the Barents Sea – at many of our sampling stations we had to break open this ice so we could collect our samples. This year satellite images have shown us there is almost no ice in the Barents Sea and ocean conditions are very different to last year. Whilst these dramatic differences in ice cover will give us a fantastic opportunity to study the effects of sea ice loss on the biodiversity and functioning of the seabed, I do hope this year proves to be an unusual event and does not signal the beginnings of regular ice-free summers in the Barents Sea.” 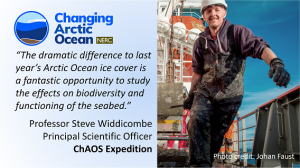 The ultimate goal of the Changing Arctic Ocean programme is to generate a better understanding of the Arctic so computer models can more accurately predict future change to the environment and the ecosystem. Within the programme there are 16 projects with more than 170 scientists combined, from 32 German and UK research institutes. The programme’s scientists are working closely with Arctic teams in 15 other countries, particularly Norway, Canada and South Korea, to meet the programme’s objectives. The outcomes of the programme will contribute to improving predictions of change in the Arctic of benefit to decision making at levels ranging from indigenous populations to international policy.

*Please note, due to unforeseeable circumstances, Prof Martin Solan was the Principle Scientific Officer during the ChAOS 2018 cruise.