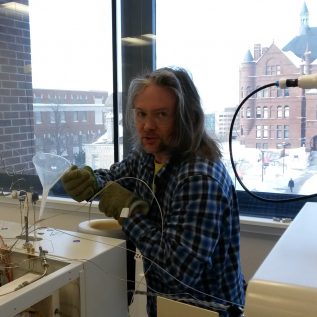 Originally trained as a field geologist, Colin developed skills that enabled the reconstruction of seasonal changes in Jurassic marine conditions through the analyses of oxygen (δ18O) and carbon (δ13C) isotopes archived in the biogenic carbonate of 160 million year old fossils. His training in geobiology was later expanded to also include the analyses of nitrogen (δ15N) and sulphur (δ34S) isotopes in ancient sediments as part of his PhD in Earth Sciences at St Andrews.

His role in the ARISE project is primarily the analyses of isotopes in seal teeth in order to contribute to the team’s attempts to ascertain any changes in the diet and trophic position of seal populations in response to resent ecological stresses.

Recent publications can be viewed on Research Gate.