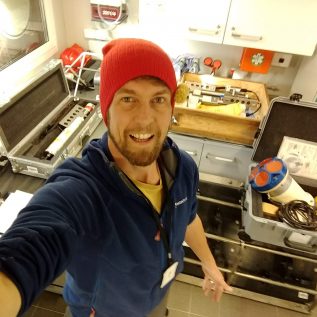 Ben Lincoln is a physical oceanographer at Bangor University, specialising in measuring turbulence and mixing in the marine environment.

As an observational oceanographer, he makes measurements of ocean currents and stratification in order to understand turbulence and mixing in the ocean, including processes, such as wind, waves, tides and internal waves.

His current research focuses on observing mixing processes in the Arctic Ocean. As post-doc in the PEANUTS project, he will be characterising the turbulent mixing at the base of the polar mixed layer across a full seasonal cycle and the effect this has on water column stratification.  New measurements made as part of the project will reveal the relative importance of intermittent mixing events in three Arctic field studies.

He has previously been involved with the Environment of the Arctic: Climate, Ocean and Sea Ice (TEA-COSI), which was part of the preceding NERC Arctic Research Programme.