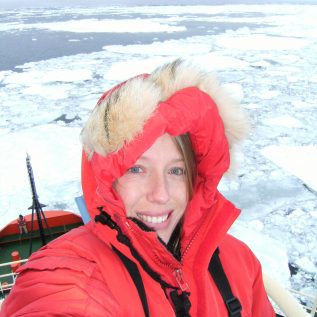 Laura Grange is a benthic marine ecologist, with a specialism in polar seafloor ecosystems currently based at Bangor University.

She has principally studied these systems in the Southern Ocean, investigating seafloor ecological processes on both sides of the Antarctic Peninsula in both shallow and deep-water marine habitats, with a particular focus on the reproductive ecology of the megabenthos.

In her role as a ChAOS team member, Laura will be involved in sampling benthos using coring systems and trawl nets to evaluate the variation in reproductive performance along a gradient in sea ice extent.

In addition, she will be collecting animals for a series of long-term mesocosm experiments designed to assess the reproductive resilience and persistence of abundant Arctic taxa exposed to ambient and future global change scenarios.

She is excited to compare and contrast what she has learned from her work in the Antarctic to the new discoveries that will be made in the Arctic during the ChAOS project.