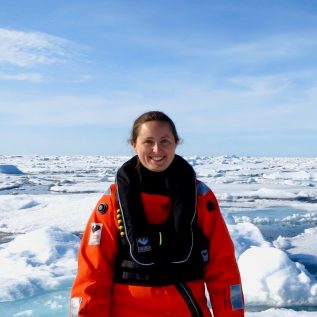 I am a physicist working in physical oceanography at the Alfred Wegener Institute (AWI), Germany.

I completed my PhD at GEOMAR Helmholtz Centre for Ocean Research in Kiel, Germany, in physical oceanography working on topography-induced deep ocean mixing. The central instrument of the study was a deep diving autonomous underwater vehicle (AUV) newly equipped with a microstructure profiler (MSP). As part of my PhD I developed the method and software for processing velocity shear data recorded with a deep diving AUV.

My current work focuses on CTD instrument coordination, preparation, data quality control, and processing in general at AWI, but also on the MOSAiC Expedition. Within MOSAiC we operate one CTD from the ship and one from the ice. Both CTDs are fully equipped with various additional instruments supplied by several international partners.

Additionally, I research physical and biogeochemical coupling in the high latitudes.

In recent years I have worked in “Frontiers in Arctic Marine Monitoring” (FRAM) to extend the capabilities of AUVs towards physical oceanography by integrating an acoustic Doppler current profiler (ADCP) and MSP. With the AUV we investigate biogeochemical coupling on scales smaller than 100 m to understand the physical processes (mixing, fluxes, up- and downwelling, frontal processes) and their impact on biogeochemistry and marine life.

I graduated in (laser) physics at the Carl Friedrich von Weizsäcker-Centre for Science and Peace Research (ZNF) at the University of Hamburg working on a miniaturised laser setup in the group Atom Trap Trace Analysis (ATTA). The aim is to develop a method to discover clandestine plutonium production. One of the biggest challenges for the Nuclear Non-Proliferation Treaty (NPT) is the exposure of clandestine activities related to the production of fission material for non-civilian projects.

In the PEANUTS project, I investigate physical processes leading to ocean mixing resulting in nutrient fluxes, and assess how these may change in a changing Arctic Ocean.