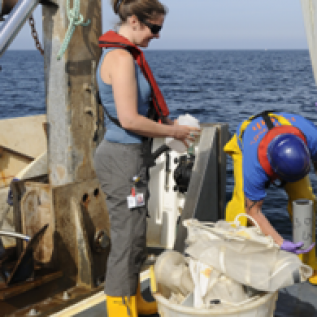 Jackie is a plankton ecologist who recently gained her PhD from Plymouth Marine Laboratory and Queen Mary University of London. Her main interests revolve around our increased understanding of marine food-web ecology, particularly predator-prey interactions (i.e. zooplankton and fish larvae/gelatinous zooplankton) and other sources of mortality.

Her PhD thesis focused on the population dynamics of the important temperate marine copepod Calanus helgolandicus; a copepod that has shown a response to warming oceans in terms of an expansion of its distribution, particularly northwards. Prior to her PhD, Jackie worked on a variety of research projects including the predator-prey dynamics of mysid shrimp and grey whales around British Columbia, Canada, and the development of a robot fish with an artificial lateral line. She has also worked for the UK Environment Agency in a number of roles, including Marine Scientist and Climate Scientist.

Jackie will be taking up a postdoctoral fellowship position at the Hakai Coastal Initiative, University of British Columbia, Vancouver, Canada directly following the PETRA research trip. Here she will be working on resolving zooplankton trophic pathways and feeding ecology using molecular gut content analysis techniques, for the enhanced prediction of food web responses to a changing ocean.

Her role in the PETRA project will be as research assistant on the ChAOS research cruise to the Barents Sea in July 2018 where she is hoping to see lots of ice, polar bears and Arctic zooplankton.