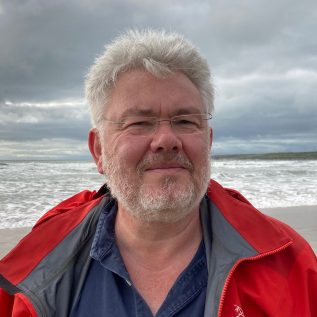 David N Thomas is Professor of Arctic Ecosystem Research in the Faculty of Biological and Environmental Sciences, University of Helsinki in Finland.

He studied and did his PhD at the University of Liverpool in the 1980s where he studied seaweed physiology, before spending 7 years in Germany (Bremen, Bremerhaven, Oldenburg) working on experiments into cold tolerance of algae and oceanographic projects in the Antarctic, Arctic, North Sea and Red Sea.

He returned to the UK where he established groups working on sea ice biogeochemistry, land-ocean interactions, and the production of biofuels from algal bioreactors in the School of Ocean Sciences, Bangor University (1996 to 2020).

He is a member of the Natural Environment Research Council (NERC) Science Committee (2017 to 2020). He also Chaired the Programme Advisory Group for the previous NERC Arctic Research Programme.

From 2013 to 2019 he was Director of the Sêr Cymru National Research Network for Low Carbon Energy and the Environment.

From 2009 to 2013 he held an Academy of Finland Distinguished Professorship and spent 2.5 years living in Helsinki while working at the Finnish Environment Institute (SYKE), where he was a Research Professor until 2019.

In 2013 he also held a Chair in Arctic Marine Biology at the Arctic Research Centre, Aarhus University, Denmark for 10 months.

He takes pride in conveying his science to non-specialist audiences, both in talks but also writing textbooks and books for non-academic audiences. Over the years, he has become increasingly interested in the connections between observational biology and art and design.