With concerns around the presence of microplastics in the environment growing, two new research papers from Plymouth Marine Laboratory (PML) and partner research institutes in the UK and Norway have highlighted their impact on crucially important members of the zooplankton, known as copepods.

One of the studies found that a species of copepod (Calanus helgolandicus), common to waters around the UK, changed their food choices depending on the type of microplastics they were exposed to. The copepods ate less of the algae that bore a resemblance to the microplastics present, so nylon fibres led to a decrease in ingestion of chain-forming algae while nylon fragments led to decreased ingestion of unicellular algae. 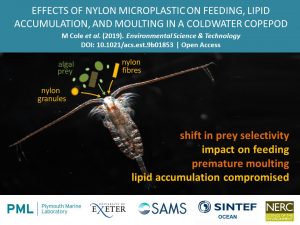 These results suggest that copepods could be losing out on available prey in an attempt to avoid accidentally consuming microplastics. Complementary research from PML  also found that exposing young copepods (Calanus finmarchicus), common to colder waters, to microplastics led to a decrease in algae eaten, as well as causing premature moulting.

Copepods are tiny crustaceans that are found almost everywhere in the oceans, and play a vital role in the functioning of marine ecosystems. Author Rachel Coppock, a PhD researcher with PML and the University of Exeter, described their significance:

Copepods are a hugely important component of marine food webs.  Near the base of the food chain, they are a key food source for larger animals such as fish and marine mammals and play a vital role in the transfer of atmospheric carbon away from surface waters and into the deep ocean.

Both of these studies looked at the effects of microplastic fibres and granules, which are more environmentally relevant than the polystyrene beads used in early exposure studies. Dr Matthew Cole, an author on both of the studies, said:

Microfibres tend to be the predominant type of microplastics we find in our coastal water samples, but until now we have had very little information about how this type of microplastic can impact on marine organisms. Our research shows that microfibres can interfere with normal copepod feeding. We also found evidence that additives incorporated into the plastic fibres may be affecting the normal development of these animals.

An additional part of the study also looked at how quickly the copepods’ faecal pellets sank after they had consumed microplastics, finding that when the copepods had eaten microplastics, their faeces sank at different rates. This might seem like an odd thing to test, but zooplankton faeces actually play an important role in the ocean’s biological carbon pump, transporting carbon away from the surface and down into deep water and sediment. If faecal pellets sink more slowly, as they do when contaminated with low-density plastics, they can remain at the surface for longer and therefore impact upon the flux of carbon down to the seabed.

The studies, carried out in conjunction with the University of Exeter, the Scottish Association of Marine Science (SAMS), University of Stirling, SINTEF Ocean and Norwegian University of Science and Technology (NTNU) in Norway, and with funding from the Natural Environment Research Council (NERC), show that microplastics, and fibres in particular, have a clear negative impact on copepod feeding. With fibres being the largest reported kind of microplastic in the ocean, this has potential negative consequences for copepods and the healthy function of the ecosystems around them.

There isn’t such a thing as a ‘standard’ microplastic. These small ubiquitous pieces of plastic vary in size, colour and composition. To understand how these diverse pollutants impact on wildlife we need more detailed research (such as these two papers) to determine how the different microplastics impact on key marine organisms – including zooplankton. Understanding how different microplastics affect organisms not only allows us to start gauging the impacts on populations and ecosystems but in addition will help to target solutions.