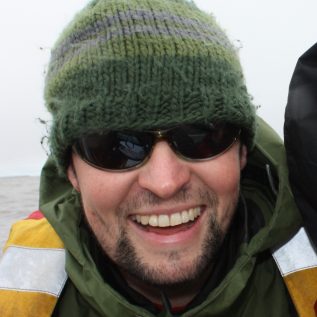 Paul Mann is senior lecturer in Biogeochemistry at the Department of Geography and Environmental Sciences, Northumbria University, and co-lead investigator of the CACOON project.

Paul’s interest in polar regions grew out of a one and a half year stint working for the British Antarctic Survey (BAS) at Rothera Research Station as a Marine Scientist. Later, his move North to the Arctic was fuelled by his post-doctoral supervisor “sending him to Siberia for three months” – which sounds like a punishment… but was great! Here he learnt how amazing the Russian Arctic was and gained a life-long interest in frozen ground (permafrost) and Russian Plov (a sort of pilaf).

Paul’s main focus is on aquatic and coastal carbon cycling in Arctic river systems, and how these will respond to future climate change. This involves studying the age and type of carbon in waters and sediments, and using a range of techniques (e.g. isotopes, enzyme assays, incubation experiments) to try and decipher where carbon has come from, and how quickly it gets buried, eaten and released as gas, or broken up (e.g. by light). This is particularly important in the Arctic as carbon that has been locked up for thousands of years starts to now be released into the modern carbon cycle.

Within CACOON, Paul will aid in sample collection and geochemical analyses on the Kolyma River during transects out from the river to the coast.