For the first time, the UK and Germany have joined forces to investigate the impact of climate change on the Arctic Ocean. 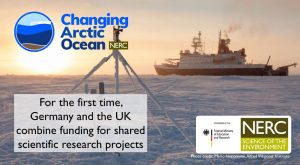 The UK’s Natural Environment Research Council (NERC) and Germany’s Federal Ministry of Education and Research (BMBF) have jointly invested almost £8 million in 12 new projects to carry out crucial research in one of the most inhospitable regions on the planet. The new projects start today and join the existing NERC Changing Arctic Ocean research programme, which aims to better understand – and predict – changes to the Arctic marine environment and ecosystems. 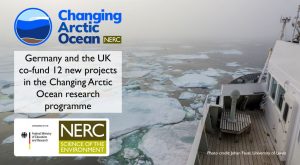 Climate change is having obvious and severe impacts in the Polar Regions. The Arctic is currently warming at more than double the rate of other parts of the globe, causing unprecedented change to the region’s ocean environment. The Arctic Ocean’s ecosystem is especially sensitive to warming because of its reliance on sea ice, from the algae that grow on its underside to polar bears that hunt and live on its surface. The accelerated melting of sea ice threatens the existence of the animals, plants and microbes that rely on it. 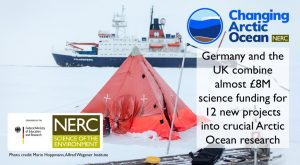 Any reduction in sea ice habitat will affect the entire food chain, including some of the most productive commercial fishing grounds in the world. Scientists don’t yet understand how these impacts are going to unfold. They need more data and improved computer models to predict the consequences. With cutting-edge science from 32 UK and German research organisations, the NERC Changing Arctic Ocean programme is helping to address these challenges. 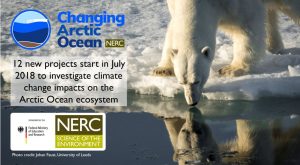 “I am proud the UK is leading the way in tackling harmful climate change and today’s announcement means world-class researchers from both the UK and Germany will now be doing vitally important work to understand changes to marine life in the Arctic Ocean.

“Through our modern Industrial Strategy we have committed to investing 2.4% of GDP on research and development to help tackle major global challenges like climate change, ensuring a better world for future generations.” 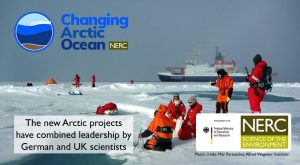 “What is happening in the Arctic strongly impacts global climate and therefore also us in Europe. We need research on the fast and profound changes occurring in the Arctic climate because these changes affect us all. That is why we are launching this important Arctic research collaboration with the UK and hosting the 2nd Arctic Science Ministerial in Berlin in October of this year. Together with science ministers from across the world and representatives of Arctic Indigenous peoples, we will discuss the great societal challenges facing the Arctic.”

Furthermore, the MOSAiC expedition will be launched in the autumn of 2019: Under the leadership of the Alfred Wegener Institute, the German research vessel Polarstern will be lodged in Arctic sea ice for a year in order to drift with the ice across the central Arctic. This unique expedition will also involve scientists engaged in German-British collaboration. 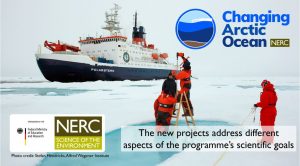 Professor David Thomas, Bangor University, is the Chair of the Programme’s Advisory Group and explains the role of international Arctic research in the programme:

“International collaboration is essential to understand how the Arctic Ocean is responding to climate change. This concerted effort from the UK and Germany, together with other international partners such as Norway, Canada and South Korea, will combine resources, for example by deploying both countries’ polar research ships, and pooling the knowledge and expertise of scientists in both countries.

“With unprecedented warming in the Arctic, this crucial research will lift the lid on the impact of climate change on the region’s marine life, and help understand how these changes could impact us closer to home.”

The 12 research projects span many of the effects of warming on the Arctic Ocean’s ecosystem. The disappearance of sea ice is one of the major drivers of change to the ecosystem (project Eco-Light). For example, the rapid melting of sea ice increases the release of chemical pollutants and plastic debris that are detrimental to marine life (project EISPAC) and exposes the ocean’s surface to the atmosphere to release climate-sensitive gases (project PETRA).

Sea ice retreat will also alter ocean circulation patterns in a manner that may potentially enhance the delivery of essential nutrients from the Atlantic and the Pacific and from deeper Arctic waters (projects APEAR and PEANUTS). This determines how well micro-organisms, that form the base of the Arctic food chain, can grow in the sun-lit surface waters (project Micro-ARC) or on the underside of sea ice (project Diatom-ARCTIC). Any change to where, when and how available these micro-organisms are will impact the food chain, with consequences for the very productive fishing grounds in the Arctic Ocean (projects Coldfish and MiMeMo).

The Arctic marine ecosystem is not isolated from changes happening on land. Warming of the Arctic region is already causing permafrost regions to thaw and freshwater runoff to the Arctic Ocean to increase. The soil nutrients and toxins released on thawing enter the Arctic Ocean and shift the nutrient balance in seawater necessary for biological productivity, as well as increasing rates of greenhouse gas emissions and ocean acidification (project CACOON). Rising temperatures are also encouraging migration of new species to the Arctic with the challenge of adjusting their biological clocks to Arctic day-lengths (project CHASE), and may cause northward displacement of Arctic species (project LOMVIA).

The Changing Arctic Ocean programme started in February 2017 with four large research projects (ARISE, Arctic PRIZE, ChAOS, DIAPOD) funded by NERC. These projects have more than 80 scientists from 18 UK research institutions. As of today, the complement of a further 12 projects co-funded by NERC and BMBF increases the programme to over 170 scientists working at 32 organisations, based in both Germany and the UK. An essential component of successful work in the Arctic is international collaboration. The programme’s scientists are working closely with Arctic teams in 15 other countries to meet the programme’s objectives. The outcomes of the programme will contribute to improving predictions of change in the Arctic of benefit to decision making at levels ranging from indigenous populations to international policy.

These new projects will carry out research complementary to the existing four projects to fulfil the scientific objectives of the programme. They are called APEAR, CACOON, CHASE, Coldfish, Diatom-ARCTIC, Eco-Light, EISPAC, LOMVIA, Micro-ARC, MiMeMo, PEANUTS, and PETRA. Full descriptions of each project are available on the Changing Arctic Ocean website (www.changing-arctic-ocean.ac.uk).