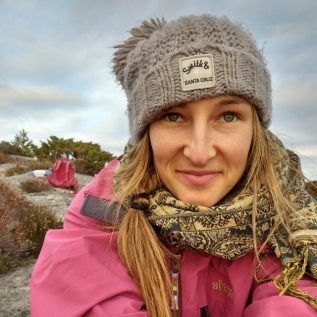 PhD Project: The effect of environmental changes on the oceanic pathways of carbon monoxide (CO) and dimethyl sulfide (DMS) in the Artic Ocean

Within my PhD project I investigate the occurrence of climate relevant trace gases in the Arctic Ocean. In particular I focus on carbon monoxide (CO) and dimethyl sulfide (DMS) which stand in close interconnection with both the anthropogenic CO2 burden and with the water (vapour) cycle, hence having a severe impact on the world’s climate.

I will have a closer look on the production and consumption pathways of both gases. The pathways, in turn, are driven by physical and chemical parameters such as light, temperature, pH as well as phytoplankton and bacteria production that are expected to underlie strong changes, especially in the Arctic region. The current distribution of trace gas concentrations will be obtained in both the vertical as well as the horizontal resolution during two research cruises to the Fram Strait.

To investigate how potential future changes may affect production and consumption pathways of CO and DMS, I will conduct ship based incubation experiments by manipulating the key parameters such as (UV) light, temperature and pH. The results will provide understanding of future trace gas cycling in the Arctic Ocean and its relevance for the regional (Arctic) and global atmosphere and climate. My PhD is part of the PETRA project.