Her photograph “Respiration” features in this post, and was selected from over 1100 entries to the competition. The entries were judged by Alex Badyaev, an evolutionary biologist and previous category winner of the Wildlife Photographer of the Year competition; Jon Blundy FRS, Subject Editor for Royal Society Open Science; Ineke De Moortel, Editorial Board Member for Philosophical Transactions A, and Ulrike Muller, Editor for Proceedings of the Royal Society B. 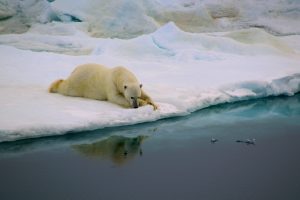 Antonia about her photograph:

“This photograph was taken while crossing the Fram Strait to recover and redeploy mooring equipment near the eastern Greenland coast. Since the Arctic Ocean is warming at double the rate compared with the rest of the globe, it was painful yet unsurprising for us to see that at 80°N sea-ice was sparse. On our journey, we saw polar bears swimming in an ocean of open water with no shadow of sea-ice for them to rest their heavy bodies on. Those polar bears were doomed to die from overheating while swimming hopelessly in any direction. The protagonist of this photograph has been lucky. He found a portion of fast ice which rapidly became his home. His gaze into the water represents the product of our societal wrongdoings. It is also a symbol of hope because what has melted can become frozen again. Canon EOS 5D Mark II + Tamron telephoto lens (70-300mm, f5.6); Picture’s contrast was slightly adjusted in Picasa Photo Editor.”