Figure above: Members of the Arctic PRIZE and Arctic SIZE team on the April 2018 cruise, and the cruise track in the Barents Sea.

This film was made during the 24 hour daylight of the Arctic Spring, when life blooms again after the darkness of the Polar winter. It was filmed and edited on board the Norwegian University of the Arctic’s research vessel Helmer Hanssen in April and May 2018 during the spring cruise of the Arctic PRIZE project. The project observes biological, chemical and physical changes in the Arctic region, as the speed of climate change quickens. The film like the project was a collaboration directed by SAMS’ filmmaker Andy Crabb with contributions from marine scientists, technicians and ship’s crew.

Several members of the Arctic PRIZE team boarded the RV Helmer Hanssen in Tromsø to carry out two weeks’ of research in the Barents Sea, near Svalbard, in the depths of winter. The aim is to investigate how marine organisms and ocean processes function during the Arctic winter.

The cruise is led jointly with the Polar Night Research Programme and the Arctic SIZE project, with additional researchers from NTNU (Trondheim) and Memorial University (Canada). 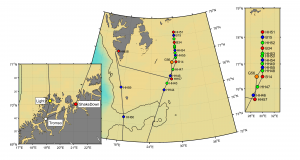 Figure above: Map of sampling stations and glider deployment during winter cruise in January 2018.

During the cruise, gliders were deployed to collect data on the conditions in the water column. The UK glider fleet missions can be accessed through the Marine Autonomous and Robotic Systems (MARS) portal. Information is available on the deployment of gliders and the latest updates, including those used during the Arctic PRIZE winter cruise.

The HH180101 cruise inventory can be accessed via the British Oceanographic Data Centre here.

A technician in the Arctic PRIZE team participated in the A-TWAIN mooring array cruise on the RV Lance. Two moorings were deployed in ~200 m water depth on the northern Svalbard slope, equipped with physical, chemical and acoustic instrumentation.

A mooring technician participated in the UNIS teaching cruise on the RV Helmer Hanssen. A camera mooring was installed in Rijpfjorden. Benthic faunal samples were collected by the Arctic PRIZE PhD student, Martin Foley.