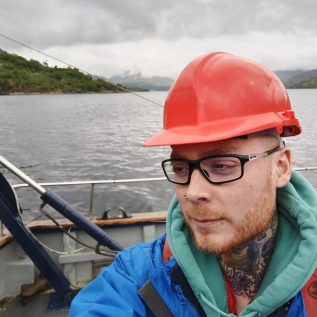 Marine zooplankton (drifting animals) are characterized by diverse, unrelated taxa, such as copepods, jellyfish and chaetognaths. All these creatures have different roles in the marine ecosystem. For the last several years, I’ve been investigating adaptations that permit “hardy” zooplankton species to survive in the Arctic Ocean.

I’ve shown that male Calanus copepods exist in the population for a very short time relative to the females, limiting the window for reproduction. I’ve found that Eukrohnia hamata, a species of Arctic chaetognath can use a wax ester store to reproduce in winter, presumably without food, much unlike other Arctic species. I’ve shown that E. hamata also has a propensity to consume diatoms, in contrast to an accepted paradigm that chaetognaths are all strict predators. Working with US high school students attending a program at Vanderbilt University, we created a phone app to help people learn about (and identify) Arctic zooplankton. This is currently available on android phones, on the Play Store.

I am currently interested in vertical migration behaviours, that allow zooplankters to shift their position in the water column. Such depth changes could be critical for the survival of these animals, helping them to find food, chase prey, avoid predators, or simply take a rest at the bottom of the water column.

In temperate regions, many zooplankton species perform daily vertical migrations (DVMs), behaviours that allow them (typically) to concentrate at shallow depths at night, where visual predators are less likely to spot them in the darkness. Here, they can peacefully feed on algae, animals or other food, until they are triggered by increasing illumination to migrate downwards into darker waters, where they can hide from the now-precarious predators found near the surface. On the other hand, the polar regions face pronounced seasonal changes in daylength, a result of the tilt of the earth’s axis of rotation. In the high-Arctic, this results in months of darkness in winter (suitably called “the polar night”), and months of constant illumination in summer (“the midnight sun”).

How does this affect zooplankton migrations?

In the CHASE project, I am working with Kim Last and Finlo Cottier. Working mostly on copepods, krill and chaetognaths, I aim to understand the influence of season, depth, an animal’s genes, and the interaction of these factors on migration patterns. To do this, I am comparing morphological, physiological, behavior and clock gene expression data for species that are found in both polar and temperate locations.

CHASE is co-funded by the German Federal Ministry of Education and Research and by NERC.